The playoffs are swiftly coming into view and the favourites to lift the Lombardi Trophy are clear but let’s not be too hasty in crowning Kansas City, Pittsburgh or New Orleans just yet. The postseason’s expansion to 14 teams increases the pack of outsiders and the chance of an outtsider fighting all the way to February. Here are the best of the underdogs (plus a team from the NFC East) who can cap a season defined by Covid-19 with a more uplifting conclusion.

The Colts sit atop the AFC South alongside Tennessee, with Sunday’s game against the Titans loaded with significance. The loser falls to 7-4 and potentially all the way down to ninth in the playoff race. Bank on Indy getting the job done through their devastating defense though. The NFC North-leading Packers and Aaron Rodgers forced Indy to the wall with a 28-14 lead at half-time last week but only three more points and defeat followed for Green Bay. The previous week the Colts trailed the Titans at half-time but roared back to victory while not conceding a single point more. The ability to stop high-powered offenses in their tracks, when it matters, is a handy trait. If the Colts are already in the postseason by Week 16, Philip Rivers and company have a free run at the Steelers, too. An enticing test and one that could be crucial in delivering a first Super Bowl since 2006.

Key player: DeForest Buckner is second in the NFL with 16 QB hits for an interior lineman, one behind Aaron Donald. His presence will be missed against the Titans after he landed on the Covid-19 list.

The only team to beat Kansas City so far this season came so very close to repeating the trick last week. It was a painful loss but the Raiders can steady the ship and stop the slide from contention by beating two weak opponents in the coming weeks, the Atlanta Falcons and the New York Jets. Derek Carr went toe-to-toe with MVP favourite Patrick Mahomes last week and was arguably the better passer on the day. The pair both threw three touchdowns and one pick. Carr’s interception in the dying moments was less damaging compared with Mahomes’ turnover on first down in the red zone before the half. Carr was brilliant against the Chiefs, so let’s not let defeat mute the impression he left on the game. He began by rattling off a perfect set of 11 passes with each of the first 10 resulting in a first down for a total of 160 yards. Las Vegas can win any playoff shootout with their quarterback in such blistering form and the temerity to remain unfazed in the presence of greatness.

Key player: Nelson Agholor is beginning to shine in his new surroundings and leads the Raiders with six touchdown catches. Agholor also has some experience when it comes to an underdog Super Bowl success: he was a pivotal piece in Philadelphia’s 2017 triumph.

Xavien Howard has been a revelation on defense for the Dolphins. Photograph: Lynne Sladky/AP

At 6-4, the Dolphins have already eclipsed last year’s 5-11 record. Even better, they are 3-1 since Tua Tagovailoa took over at quarterback, with impressive wins over the Los Angeles Rams and Chargers. Miami’s road to the Super Bowl lies with the defense, however, and the reinforcements Brian Flores brought to Florida in the offseason. Shutdown corner Byron Jones rolling up alongside Xavien Howard beefed up an already intimidating secondary while the front seven was upgraded with Emmanuel Ogbah, Shaq Lawson and Kyle van Noy’s arrivals. Miami rolled the dice and have reaped the reward, transforming the unit ranked dead last by Football Outsiders in 2019 to 15th this campaign. The Dolphins now concede 20 points per game, the fourth-best total in the league, compared to 31 last season, which placed them rock bottom. Where Flores has flourished has been using deception to throw offenses into turmoil. He has regularly sent eight men across the line then immediately dropped two back before sacking the quarterback as the true blitzer is left unblocked. It worked wonders in driving a system passer like Jared Goff crazy when the Dolphins upset the Rams earlier this month. Forcing opponents’ passes to fly everywhere but the arms of receivers could earn a first postseason victory for Miami since 2000.

The Cardinals should make the postseason despite sitting third in the NFC West at 6-4. Their final six games feature winnable matchups with the Patriots, Giants, Eagles and 49ers, which allows for a degree of confidence in at least securing a wild card. The Cards have watched each of their division rivals make the Super Bowl in the last decade but now, with the conference looking comparatively open, Kyler Murray can finally lead them back to the promised land. Arizona lead the league in yards per game (414), while Murray’s 29 total touchdowns firmly put him in the running for MVP. Then there is DeAndre Hopkins. The game-winning Hail Mary catch against Buffalo was the latest instalment in his ‘how to punish defenders’ series. The stars may just be aligning for Kliff Kingsbury and the Cardinals to meet the Steelers in the Super Bowl and take glorious revenge on Ben Roethlisberger for their heartbreaking defeat in 2009 at the same Raymond James Stadium that will host this season’s showpiece.

Key player: Budda Baker is the cutting edge on defense. He earned the NFC defensive player award for October – and the only game Arizona lost that month was the one he missed. 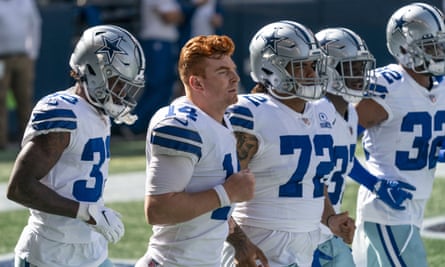 Despite the loss to Washington, Andy Dalton and the Cowboys are still in the playoff picture. Photograph: Stephen Brashear/AP

The Cowboys are true outsiders … sort of. Someone has to win the NFC East, almost definitely with a losing record. Dallas are going to do it, even after their loss to Washington on Thursday. You can feel it. Andy Dalton transforms into 12-4 2015 Bengals mode and we can finally see the full force of CeeDee Lamb, Amari Cooper and Michael Gallup. Then anything can happen in January. Maybe. An offensive line would help too.

Key player: Ezekiel Elliot, a force of nature at running back who can, more realistically, take some pressure off Dalton and lead Dallas to a 5-11 or 6-10 division win.

5 thoughts on “The NFL underdog index: which teams could spring a Super Bowl surprise? | NFL”